The St. Bartholomew's Day massacre (Massacre de la Saint-Barthélemy in French) in 1572 was a targeted group of assassinations, followed by a wave of Roman Catholic mob violence, both directed against the Huguenots (French Calvinist Protestants), during the French Wars of Religion. Traditionally believed to have been instigated by Catherine de' Medici, the mother of King Charles IX, the massacre took place six days after the wedding of the king's sister Margaret to the Protestant Henry III of Navarre (the future Henry IV of France). This marriage was an occasion for which many of the most wealthy and prominent Huguenots had gathered in largely Catholic Paris.

The massacre began two days after the attempted assassination of Admiral Gaspard de Coligny, the military and political leader of the Huguenots. Starting on 23 August 1572 (the eve of the feast of Bartholomew the Apostle) with murders on orders of the king of a group of Huguenot leaders including Coligny, the massacres spread throughout Paris. Lasting several weeks, the massacre extended to other urban centres and the countryside. Modern estimates for the number of dead vary widely between 5,000 and 30,000 in total.

The massacre also marked a turning point in the French Wars of Religion. The Huguenot political movement was crippled by the loss of many of its prominent aristocratic leaders, as well as many re-conversions by the rank and file, and those who remained were increasingly radicalized. Though by no means unique, it "was the worst of the century's religious massacres." [2] Throughout Europe, it "printed on Protestant minds the indelible conviction that Catholicism was a bloody and treacherous religion".[3]
Posted by PM Summer at 12:01 AM No comments:

To Pray Unceasingly…
Posted by PM Summer at 5:34 PM No comments:

The ravages of time. 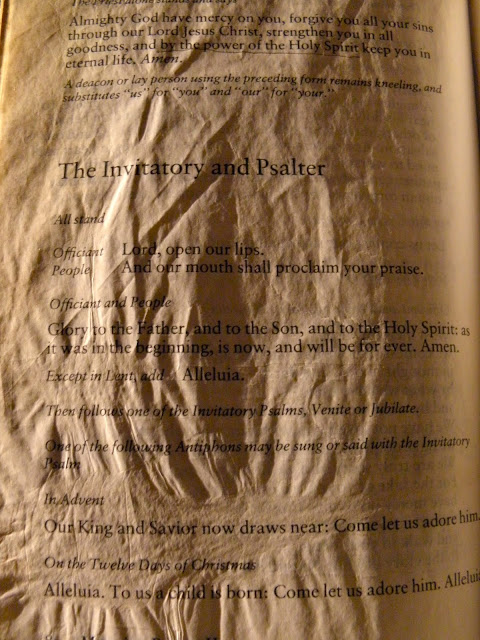 I run my Klipschorns (seen above tucked unobtrusively in the corners of the room) with a McIntosh MA 6100 integrated amplifier (center). After almost 40 years of faithful service, the McIntosh needed some attention, so I took it in for a full restoration. When I got it back last month, the new volume pot from Mac was kinda wonky, so I took it back to be replaced (McIntosh admits that a high percentage of the new not-quite-OEM pots are faulty).

In the interim, a friend loaned me his McIntosh C26 pre-amp, which I used with my old Harman/Kardon Citation 12 amplifier. Neither has been restored, and were used only occasionally over the last few years.

The time came to make the 500 mile round trip to pick up the 6100. As my tech friend and I were talking, I noticed he was running a Citation 12 amp just like mine. He told me a horror story about how it went into complete fail, dumping enough DC into his speakers to fry the voice coils. I hate those kind of stories.

Got home in time for dinner. Too tired to hook up the 6100. Dinner was hamburger steak cooked inside.

We (wife and aged in-laws) were listening to the Ks through my friend's C26 and the Citation 12 at low volume as we prepared to sit down for dinner, when what sounded like the LOUDEST MILITARY/INDUSTRIAL smoke alarm I've ever heard went off. My wife got her parents outside while I ran around looking for something that might have set it off. Screaming so loud I can barely think. I can FEEL the sound in my chest as I move upstairs, where the sound lessens. No smoke. No smell of smoke. Check the attic. No smoke. Run back downstairs and into the garage. No smoke. I start hitting the circuit breaker looking for the alarm (thinking the dinner smoke must have set it off). The last breaker kills the smoke alarm. TWO MINUTES? FIVE MINUTES? I don't know how long it went on, but it seemed like an eternity.

I get everyone back in, check on the condition of the elders, and they're OK. Go over to the amp to make sure there's no smoke smell there. None. But I turn it off anyway, even though it's killed on the same switched-off circuit that the alarm is on (or so I think). Again I check every room. No smoke smells, no fires, no signs of trouble.

After dinner, I have everyone cover their ears and I turn the alarm breaker back on (I think... it's not marked on the panel... the switch that killed the "alarm" says kitchen vent). All quiet. I come back in and try to relax. Decide some jazz will help.

I turn on the amp (the Citation is controlled from the C26).

EAR-SPLITTING, CHEST-PUNCHING NOISE FROM THE K-HORNS!!!! ARKANSAS BANSHEES FROM HELL!!!! Quickly, I turn off the amp. Arrrggghhhhh!

It never was the smoke alarm. It was the Klipschorns screaming for their lives!

The damn Citation had died, just like the one my tech/friend and I had talked about that very day. The Big Ks seemed to have survived (somehow). Un-frigging-believable. That was the loudest thing I have ever heard (sustained). How the K's (and Bob Crites' CT-125s with his revised XO) survived that, I can't imagine. But I am thankful.

As a test, and for ease and safety, I hooked up my $25 T-amp (5 WPC) through the C26. Everything seems OK. All drivers work and sound good. My ears are still ringing, though (in addition to my normal tinnitus).

The MA 6100 is back in-system today. Sounds great. The Citation will be carted off for new outputs (although my first thought was to throw the damn thing into the lake).
Posted by PM Summer at 4:59 PM 4 comments:

"The belief that there are other life forms in the universe is a matter of faith. There is not a single shred of evidence for any other life forms, and in forty years of searching, none has been discovered. There is absolutely no evidentiary reason to maintain this belief."